We have talked much already about the ominous prophetic signs for 2017 in earlier articles where we predicted that 2017 will be a cataclysmic year in line with Buddha´s prophecy 2500 years ago, in line with Judaism´s prophecy, in line with Ragno Nero´s prophecy for 2017 and also in line with Nostradamus prophecy 6:66 indicating great events after Jesus tomb was opened in Jerusalem in October. 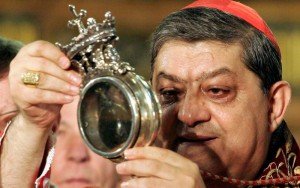 Now another sign from Heaven was presented on December 16th in Naples, Italy when Saint  Januarius miraculous blood from 1700 years ago didn´t liquefy as usual in the ceremony in Naples Cathedral. This is said to signify great disasters for 2017. The prophetic signs from Heaven have become ominous for 2017 – the greatest ever in the recorded history of mankind we believe.

The blood from the persecuted and executed Saint Januarius was saved from a believer around 1600 years ago and has been used for about 600 years to make predictions for the next year. It has failed to liquify only two times in history. Once in 1939 just before the second world war and the second time in 1980 just before the earthquake of Irpinia in which 300 people died, according to the Stampa report. Believers in Italy immediately started to pray in order to alleviate the coming disasters.

For a full background article of the recent events in Italy please read Business Insider Nordic.