We have talked about Falun Gong and the prophecies surrounding it and the cataclysmic year of 2017 – which is the year of the ”Negative Fire Rooster” in the Chinese calendar. Now it turns out that the Rothschild family ran an article in the Economist in 1988 where they predicted that a new world currency would be implemented around the year 2018 – and its name would be ”Phoenix”. This is nothing less than sensational to people studying prophecies. 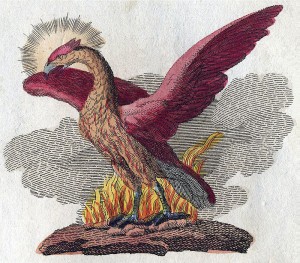 Some people may know about the Phoenix legend where the mythical bird returns to mankind once in 500 years and marks the birth of a new era. The Phoenix is also associated with fire as it gains new life by rising out of the ashes of its predecessor. So it seems like Rothschild who is called ”King of the (western) jews” wants to reset the whole world economy before next year and be in charge of the world´s money yet again. Such a huge economic reset requires a quick world war followed by a world government. Our current NWO wants to have Masters(Luciferian elite of super bankers and occult leaders) of mankind and the slaves of mankind(the servants will be the survivors of mankind – the ordinary people). Actually the NWO has an absolute belief in the prophecies and that is why their plans for mankind coincide with the prophecies being foretold many centuries or even millennia ago.

Buddhism has told that each phase of mankind is 500 years and this year it´s now exactly 2500 years(5 phases have passed) since Buddha Shakyamuni passed away in India in 483 BC. From Chinese physics we know that there are 5 elements – Metal, Wood, Water, Fire And Earth. Have we passed through all 5 elements and we are reaching the underworld – the hell fire in 2017 and the 6th element(remember 666 is the evil number)? This is exactly how Norse mythology puts it – Ragnarokkr starts when the rooster crows down into hell and this year until february 2018 it is the ”Negative Fire Rooster Year” in China.

There are a plethora of prophecies indicating the year 2017 as the year of the big shift in prophecy:

The main ingredients of the miraculous 2017 is supposed to be a quick world war followed by the first resurrection with the arrival of the Lord to the human world. The truth of Falun Gong is displayed to everyone, the Beast of the East dies(Jiang Zemin) and miracles appear across the world. Also, a divinely inspired Warrior King arrives that will take down the corrupt republics and reinstate real Kings of each country.

Who can imagine what the next twelve months hold in store for mankind? Mankind has never had a similar situation with super powers preparing for war in both Syria and North Korea as well as in India where both China and India mobilize their armies at this moment. It seems like all prophecies are coming true as we speak but it will still be unimaginable to most people until the day it really happens.