Many of our readers might have noticed that many religious leaders these days seem to have lost faith in their own religion. At the same time they focus more and more on political issues that they deem more important than religion. You could say that they are more interested in human politics than religious issues.

In 2014 Pope Francis introduced muslim prayers at the Vatican and said that any relationship with Jesus outside the Church s very dangerous. Such comments make everyone wonder about his own faith and Al Gore the former American Vice-President asked: ”Is the pope catholic?”. In addition he uses the bent cross of Jesus Christ which reminds us of Satanist crosses. 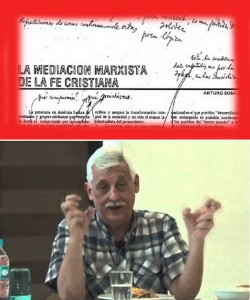 In 2016 Pope Francis blessed the new ”Black Pope”, the Jesuit Adolfo Sosa to become ”Superior General” of the infamous jesuit order. Historically the black pope is rumored to rule the ”white pope” that we see on the television. They were infamous sorcerers and subverters in old times. The Jesuit order was excommunicated from the Catholic Church in the 1700s due to their treasonous activities but got reinstated after a few decades. Today the popes are both from the same jesuit order, and Mr Sosa sent a letter of appreciation in 1989 to Fidel Castro, the Cuban communist dictator. He has also appointed marxist ”catholics” to the top positions within the Jesuit order. It´s more and more clear that the whole Christian church has been hijacked by the atheist, globalist priests.

In January 2016 the Vatican released a video in which Pope Francis declared that all of the major world religions are ”seeking God or meeting God in different ways” and that ultimately ”we are all children of God”.  Pope Francis has repeatedly pushed for a world religion during the last few years and it means that he wants to kill his own religion – Christianity. If that is not a treasonous activity against his own believers what is? Did he ask Christians if they want to kill Christianity? He simply advances the globalist agenda of a world state and a world religion and he does it more and more openly.

The latest speech, which took place on June 25 2017, is merely the latest eyebrow-raising announcement by the liberal Pope. A Pope is not supposed to intervene in politics but this is exactly what our Pope does.

Pope Francis told the Italian newspaper La Repubblica that the United States of America has “a distorted vision of the world” and Americans must be ruled by a world government, as soon as possible, “for their own good.”

Speaking with Ecuador’s El Universo newspaper, the Pope said that the United Nations doesnt have enough power and must be granted full governmental control “for the good of humanity.”

The globalization movement cannot be underestimated. It is the process of transitioning the world into a global government and eroding the rights of the individual. World religious leaders, led by the increasingly anti-Christian Pope Francis, are playing their part in this great deception.

David Rockefeller famously said that a “global crisis” would have to occur before the people of the world would be willing to accept a New World Order. Sure enough, when the world economy suffered a dramatic crash in 2008, world leaders again proclaimed the need for a New World Order with global financial control.

As demonstrated by Pope Francis, climate change and global warming is now the global elite’s preferred method of scaremongering, as they attempt to shepherd humanity closer to unified totalitarian rule.

Pope Francis is determined to steer his flock away from Jesus. The pontiff who held Islamic prayers in the Vatican, and later warned his followers not to enter into a personal relationship with Jesus, is obviously no Christian with a sinister agenda.

The jesuit pope is a key player in the plan to usher in a New World Order(NWO), determined to mislead his flock while catering to the global cabal of satanists playing other roles in their grand scheme such as politicians, advisors, militaries, doctors, media tycoons and super bankers.

Conclusion – The End Of Christianity As We Know It

Christianity collapses – the end of our civilization as we know it?

Does Pope Francis care about Jesus? It seems like he is merely a tool of the globalist NWO group of people trying to impose a world state with their own manmade world religion to the world´s people. They promote mass migration, cultural marxism and endless tolerance to LGBT people and other modern phenomena which have always been heretic in Christianity. At the same time the Christian clergy has been exposed with an abundance of pedophiles and other degenerated phenomena completely against the ten commandments of Jesus.

Enlightened man Emanuel Swedenborg said that winter signifies the end of the church and in Norse myth we can read the following prophecy about the ”Fimbul Winter” preceding Ragnarokkr:

”Fimbulwinter is three successive winters, when snow comes in from all directions, without any intervening summer. Then, there will be innumerable wars.” (Source: Wikipedia)

The event is described primarily in the Poetic Edda.

Pope Francis ascended his throne in 2013 and gradually he has become more and more radical and political. You could say that the three final years of completely demonic Christianity has passed by now and we expect the next phase to start in line with the predictions of the Norse myth and many other prophets and influential world leaders.

The positive thing is that death also means rebirth and there will be survivors from Ragnarokkr according to Norse myth just like the Bible states that the faithful will survive the End of Times in the Bible. It is believed that the next civilization will be more wondrous than any previous civilization based on the terrifying experiences of our current period of time – the Devil´s days as the Knight Templar Prophecy calls them.