We have stated before that this time period of the year of the cock is crucial in many prophecies. After the cock crows the dawn is nearly here and the night will pass away. Usually the cock crows about 2 hours before dawn and in many prophecies 2017-2019 is perhaps the most debated of all. In prophecy when dawn arrives the evil of this world will have to be eliminated and that is exactly what Ragno Nero has predicted in his prophecy and he states that the 72 representatives of evil in the western world will all be dead by 2019. 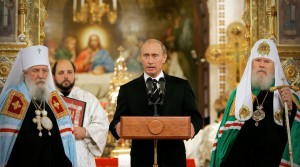 In any case, if we look at the latest events we find two outstanding reports from the U.S. and Russia in the last week. In Russia, Moscow Times reports that President Putin has made some outstanding comments about Christianity and communism. He actually claimed that mass murderer Lenin can be equaled to the Christian saints whose relics are also worshiped just like Lenin is worshiped in his mausoleum. Secondly Putin also stated that communism and Christianity is the same and that he still likes communism very much and that he still keeps his communist party membership card at home. What he forgot to tell us is that communism is based on lies, hatred of the population and instigating conflicts between different parts of the populace. At a higher and more secret level communism is Luciferianism, an evil cult which has taken over the governments all across the world by its central banking cartel controlling all the governments.  Many observers have the same conclusion about Putin. If true this means that the whole world is in the evil´s hands and whichever conflicts we see in the media are just illusions to scare people into submission and make people fight each other instead of fighting these people who cooperate and betray the whole world.

The shocking conclusion of these comments made by President Putin is that he is controlled opposition by the NWO in order to destroy Russia and all Christian culture. Many westerners see Putin as the only hope for the west and the white population and now it turns out that he is also working for the evil. We suspected this a long time ago and we also reported that he could never have become KGB chief without having been a part of the NWO. Our only hope with Putin is that he will change his mind in the next phase and start to believe in goodness. This is actually indicated in some prophecies.

Secondly, there was a missile warning alert in Hawaii on Januari 13th sent to all Hawaiian people via SMS, commercial radio, television etc. This is of course a huge event which was confiremd in the MSM. However, the explanation given in the MSM doesn´t hold up. They claimed that the missile alert was issued by a guy who “pushed the wrong button”. That is of course out of question as there are many people who need to cooperate in order to issue a missile alert. This is of major importance and shows us that a potential huge conflict is brewing in the deep state of the U.S. administration. Different reports from insiders have leaked out and they claim that there was a submarine that launched a cruise missile against Hawaii in order to blame it on North Korea. Possibly it came from an Israeli submarine and the missile was intercepted while the submarine was sunk according to these insiders. Several eye witnesses report having seen a missile in the sky outside Hawaii. We don´t know the truth but this is nothing short of sensational and indicates that there are strong powers looking to launch WW III asap while there seems to be another faction who want to stop it or have it in theor own way.

Thirdly, the U.S. government is out of money again and had to shut down some departments today because the congress can´t agree and perhaps the democrats want to make trouble for Trump. On 31st of January there is a new still-unfunded January 31st payment deadline for the U.S. administration. In short, the U.S. is up to its ears in debt and the creditors use their power to push the Trump administration. On the other hand the U.S. still has the strongest military on earth and that´s a reason why we might see a military conflict soon.

To summarize we can see huge tension in the world today and while we sadly conclude that Putin most likely belongs to the Luciferian group of people trying to implement their world government we know that there will be fierce resistance to these people when the public realizes the truth. In Norse mythology it is said that after the cock crows down to hell(this is the fire cock´s year..) the wolf is let loose and Ragnarok is launched where good and evil powers will battle it out, both humans and Gods. On February 15th we pass from the year of the cock to the year of the dog in the Chinese lunar calendar. The dog is a very close relative of the wolf as we all know… Exciting times are ahead of us to say the least. Expect the unexpected to happen, keep an open mind and have faith in the power of kindness.