Communism is Based on Deception and Murder

Why were communists obsessed by taking power at all means – no matter how many people they kill in the process? Isn´t it because they were murderers and criminals from the beginning? If their ideas were so good, why couldn´t people accept them?
Were they not worshipping the devil secretly but they left out that information and only stated that they don´t believe in God.
We have previously discussed the real storyline of the Garden of Eden. We all know that the snake Lilith fed Eve and Adam the forbidden fruits and Eve first ate it. Then she persuaded Adam to eat it too and then they suddenly saw that they were naked. Their sexual desire had been arisen but not only that. They had become snakes – snakes are focused on sexual desire and snakes don´t wear clothes. Here is a key to the secret of the Garden of Eden:
Human beings wear clothes – animals are naked. This is a major difference between a beast and a human. 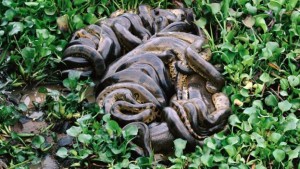 Anaconda snake pit with many male snakes
________
Snakes are terrifying animals with a matriarchic culture who use snake pits while breeding – one female lies with up to hundreds of male snakes competing for her. Male snakes even develop double genitals in their desperation to find a female and they die prematurely because of their extensive focus on the breeding ceremony.
_________
We have learned that “you become what you eat” in our human life. So when you eat something from a snake – doesn´t that mean that you become a snake yourself? It makes sense and snakes don´t wear clothes so that is why it is said that Adam and Eve became all naked after they ate the apples. In addition the snake is connected to sexual lust and desire which is exactly what arose in Adam and Eve when they saw that they were naked. Their innocence had disappeared and they became deceptive beings like their snake mother Lilith.
_________
Adam and Eve were ashamed that they had become naked snakes so they hurried and tried to cover their bodies with leaves so that God wouldn´t find out about their rebellion against God. In the end it didn´t help at all because the Lord banished both of them with their “snake mother Lilith” from the Garden of Eden because of their dishonesty and rebellion.
_________

Adam and Eve Became Enslaved by the Mother Snake Lilith

The key point here is that Adam and Eve were enslaved by the snake Lilith when they accepted the snake´s truth instead of God´s truth. The snake became their mother and their leader instead of God. Hence they became children of the snake and snakes themselves.
This is one of the hidden secrets of the number of the beast: 666. Lilith, Eve and Adam all became snakes which has the number 6.  It´s the sixth animal in Chinese calendar and is always connected to the number of six.
Of course, the national day of (Sw)Eden is 6/6 and sages like Olof von Dalin have pointed out the nation of Sweden as the root cause of evil against God and the home country of Adam and Eve.
If the whole culture of mankind becomes a snake culture – what can be done? The only thing to do in that case is to expose everything and compare modern man with animal snakes. It isn´t pleasant but it´s necessary. 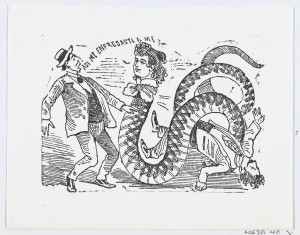 Nothing can be done otherwise because imagine if humans are raised up to become snakes with human skins unknowingly. People are not taught about morality and human culture and they become beasts a thousand times worse than Adam and Eve. Isn´t this the greatest danger to mankind? Infinitely more dangerous than any war or murder – it means the end of mankind.
___________
This was the idea of evil demons with human skins that conspired to create a slave culture of beasts. This would be an exact repetition of the story in the Garden of Eden. The ultimate betrayal of divine culture and a murder of all mankind. Still, mankind would be guilty of voluntarily choosing a snake culture if they don´t fight it.
If there is an order to things we need to look for a predestined woman assigned to spread the snake culture to man when communism first took power in Russia. These are secrets that are now about to be revealed to all of mankind.
Part II: The Horror of Comparing Modern Man´s Culture with Animal Snake Culture