Chinese mythology is incredibly diverse and interesting as every story tells us that all things may reincarnate and change their life forms. A stone may become a plant. A plant may become an animal. An animal may become a human. A human may become a god. The Legend of Madam White Snake is counted as one of China’s Four Great Folktales, the others being Lady Meng Jiang, Butterfly Lovers and the Cowherd and the Weaver Girl. The Legend of Madam White Snake has expanded all throughout China and many other surrounding countries such as Japan, Korea, Vietnam and even parts of India.

The story has some main themes which are very well mirrored by the western creation myth from the Garden of Eden – but with some more details and interesting angles in the Chinese version. The story was formed during the Song dynasty but some elements of it were passed around orally at the end of the Tang dynasty. 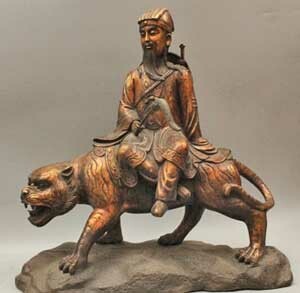 – There is a man in the story, Xu Xuan, who gets immortality pills from the sage Lü Dongbin (pictured left) and then questions the sage who sold them to him. As soon as he questions the sage he is turned upside down by Lü Dongbin (his manhood gets reversed so he becomes a “man-woman”) and is forced to spit out the magical pills.

– There is a female white snake who picks up the magical pills in the lake under the bridge. She is grateful to Xu Xuan who spat out the pills. The white snake is said to be a white Python snake in some legends.

– The white snake then saves a green snake from death by buying the snake from the person who was just about to kill it. So she pays money in order to save the green snake.

– The white and green snake (green symbolizes jealousy) then forms an alliance. Compare with Lilith and Eve in the Garden of Eden. Lilith recruits Eve to cooperate with her and Lilith promises Eve that she can become a God in her own right if she does what Lilith tells her. Of course, Lilith is a jealous (green) snake who wants to destroy Adam and Eve but what about Eve? If Eve eats the fruits of the snake she will also become a snake right? And the same goes for Adam when he eats the snake´s fruits. We become what we eat is a truth in the human world.

– The two snakes get a human body and White Snake then seduces the man Xu Xuan and marries him. Compare with Eve who first eats the snake fruit and then goes to Adam and makes him eat the snake fruit too. Then their lust is incited – you could say that Adam and Eve marry but without the formal marriage ceremony – this is mirrored by modern culture where man and woman cohabit.

– The Buddhist monk Fahai (who was earlier a turtle in the same lake as White snake) warns Xu Xuan at the wedding about getting married to a snake (Xu Xuan doesn´t believe the monk´s statement that the woman is a python snake) and then tricks the White Snake to shape shift into her real form. Once Xu Xuan sees his wife being a gigantic white python snake he dies from instant fear.

– The two snakes become sad and want to revive Xu Xuan. They go to a holy mountain and find a magic cure for the man and they then revive him by using this magic.

– Fahai teaches Xu Xuan that he should keep away from the snakes and Xu Xuan then becomes a monk and learn meditation.

– The snakes escape imprisonment and Green Snake defeats the monk and White Snake remarries Xu Xuan again – he can not resist her and voluntarily goes to her despite knowing that she is a snake.

– Finally Fahai has to flee from the snakes and he hides himself in a crab fish. 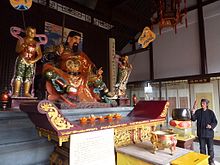 During the Song dynasty (960-1279), the God Zhenwu (pictured left) received a human form. His name was changed to Zhenwu, the Perfected Warrior. This was to avoid taboo on the name of a Song ancestor with a similar name. After the miraculous appearance of a snake and tortoise, followed by a spring bursting forth from the ground in 1017, Emperor Zhenzong commissioned the construction of the first temple to Zhenwu in the capital city of Kaifeng. In legend the snake and tortoise are said to be the intestines and stomach from Zhenwu and they gradually spread evil in the human world.

Zhenwu also took on a healer-god mantle, as he was said to have cured Emperor Renzong of illness. The histories say that their descendant, Emperor Huizong had a powerful Taoist practitioner, Lin Lingsu, summon Zhenwu to his palace in 1118 (101 years after the appearance of the snake and tortoise when the North Song was transiting to South Song). First, a snake and tortoise filled the hall. They disappeared and a huge foot appeared in their place. After more incantations and requests, the huge full figure of the god was seen. He had long, unbound hair and a black cloak. His feet were bare, he wore golden armour and carried a sword. Flying scarves encircled him and a round halo floated above his head. The emperor drew a picture of the god and had the imperial artists make a painting from it to be enshrined. This imagery of the god has remained to this day. Pak Tai is easily recognisable in Hong Kong as a seated barefoot warrior, long hair worn loose, with a halo above his head. He is usually holding a sword with his feet resting on a tortoise and a snake, representing his earlier incarnation and his powers of exorcism. 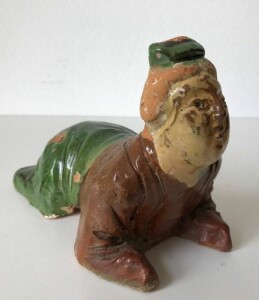 North Song Dynasty artifact to the left – green Man-Snake-Tortoise crawling, with face looking more like a woman with a green snake head on top. This image is exactly in line with other North Song artifacts with a turtle under a snake that coils around the turtle. This artist probably knew exactly what was going on in the North Song dynasty with man becoming a man-snake as yin and yang was mixed and traditional culture trampled. One example is that the officials in North Song got military ranks. Remember the snake has a forked tongue or a double tongue. It uses double speech and can mix lies with truth. 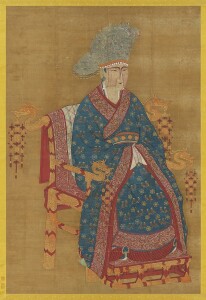 In North Song dynasty the most famous empress, Liu Zhenzong (pictured left), was very evil and she was portrayed with a mask over her face, a sure sign of a demon in Asian culture. The artist of course knew about it and the interesting thing is that the empress allowed him to paint the mask and still he got away with it. The empress put on the emperor´s robe in her rebellion against tradition – but only lived a month after that transgression.

Most famous is she for supposedly having robbed the emperor son, deceiving him into believing that she was his real mother, and having framed his real mother by putting a skinned cat in the crib. She claimed that the real mother had given birth to a monster and the real mother was then thrown out of the palace (and murdered by Liu according to the stories of a sage living during those times). She is also said, by some modern researchers, to have secretly worshipped Wu Zetian (the most infamous and evil woman in Chinese history) as her previous incarnation.

When looking at the Chinese legends with Nü Wa and Fu Xi (pictured to the left) – with snake bodies and a human head – creating mankind, we can with our current knowledge automatically start to think that nothing is a coincidence in this human world. Then we have the North Song dynasty (960-1127) where the image of a snake that coils around a tortoise (reptile) was the big theme for the emperors and they even miraculously appeared to the soldiers.

It seems like Adam and Eve easily could have avoided to eat the snake´s fruits but in reality it seems like man has been offered all kinds of snake fruits since the beginning of time and now is the first time that man has started to realise what is really going on and that this is the biggest choice for the future. To be a man (in one´s actions) or be a snake (in actions). The difference lies in social life and human character traits such as honesty, courage, upright morality, kindness to one´s offspring, openness, traditional family culture, sex habits etc.

As shocking as these old myths are the more obvious it seems that man has been reared towards becoming “mini snakes” under the “Big Mama Snake Demon King” called Lilith in the west and with other names in the east. The obvious differences between man and snake culture is now unveiled for everyone to see. 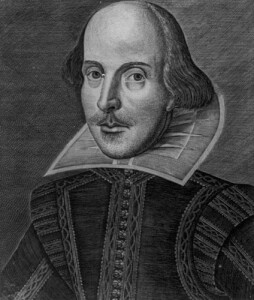 Man or beast is the question or as Shakespeare, left, put it in his epic play “Hamlet” (his plot unfolds at Kronborg Castle in Denmark, the Nordic country next to Sweden):

To be, or not to be, that is the question:
Whether ’tis nobler in the mind to suffer
The slings and arrows of outrageous fortune,
Or to take arms against a sea of troubles
And by opposing end them. To die—to sleep,
No more; and by a sleep to say we end
The heart-ache and the thousand natural shocks
That flesh is heir to: ’tis a consummation
Devoutly to be wish’d. To die, to sleep;
………..
Full version of Hamlet HERE
——————————————— 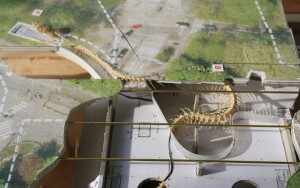 The enormous white python skeleton in Gothenburg leads down underground (to hell – my interpretation) to a metro station and is produced by a Chinese artist from Shanghai – again China and Shanghai. Look at these facts:
–  the length of the python skeleton is 318 meters. 666 is the name of the beast. That is 3 x 6 = 18. So 318 meters means the number of the beast.
– This metro station is placed below a Christian church (that will be torn down).
– The artist claims that the snake will link God and the devil (!!!)…
– The artist calls the snake “Rainbow Python Snake” – there are obvious hints to modern culture with the snake.
– The travellers will have to enter the wide open mouth of the snake to go underground to the platform. Compare with biblical tales of being swallowed by the beast.
– The white python skeleton exactly mimics ancient paintings of the Chinese creator Nüwa who has a human head and a shite skeleton which is burning under the head (her lower body symbolising hell).
To summarise the Gothenburg snake project in Gothenburg – it is a sensation from a spiritual perspective – especially since it has all the connections to the CCP, to (Sw)Eden, to the underground, to a white snake and to the legendary beast of 666.
What is going on behind the scenes in Gothenburg?