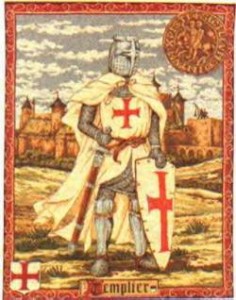 The prophecy of John of Jerusalem from 1099 is a contested prophecy and the holders of the seven original manuscripts have not released them to the public. The first translation came out in 1994 in French and German versions. My personal opinion is that this prophecy has deep wisdom and knowledge and it is a true prophecy. If we think from the perspective of the hidden rulers of our society, would they like to verify and confirm this prophecy? Probably not.

John of Jerusalem (or Jean de Vézelay) was one of the eight founders of the Knights Templar. Below a summary of the prophecy.

The Great Spiritual Civilization in Year 3000

The second part of the prophecy predicts a new era full of hope, called: ”When the Thousand Years which comes after the Thousand Years are full”, which means around year 3000. People are no longer locked up in their minds or in their cities. The whole world will speak one single language. Mankind will form a great single body. Everybody is one single part of the great body. Together they form a heart.

The prophet makes it clear that mankind will learn a profound lesson from this modern era and in the future mankind will have true wisdom and true spiritual beliefs which will make him infinitely more happy. Everyone will help others and open their hearts to others since that is the only way to maintain human civilization. People will know that reincarnation is true and they won´t fear human death anymore. Many people will have supernormal powers such as telepathy and levitation. Health issues will be cured before they become serious. They know the future and act accordingly.

Finally the great human being will be born and he will know the spirit of all things. The happy days will start and he will feel like a knight of the human order.

A warning to people living around year 2000

He predicts with a stunning accuracy our current depraved era. He talks about atheism, the collapse of the family and marriage, the secret societies and the hidden rulers deceiving the masses, greed, selfishness, pride, all kinds of depraved sexual desires, modern technology etc. He explicitly warns people of the modern atheist culture and the depraved moral values. He also says that modern people will be passive weaklings who close their eyes when a woman is raped. The hidden rulers of mankind will be corrupted people in black secret societies and hatred is their ideology while poison is their weapon. He talks about communism which is preached around the whole world today, overtly or covertly through cultural marxism. It infects people and transforms their minds slowly into selfish minds without family values or divine faith.

People will not do anything good and they will be pitted against eachother as sheep by their corrupt rulers. People believe they are free but they are true slaves. Migration and mixing of people will take place, people become atheists and their families collapse. Fear will be in every heart like poison.  Those who preach spiritual values will be ignored. The modern gadgets will deceive people´s senses and make them create false fantasies. His head is heavy from knowledge but he has no clue why he lives or dies. He will be full of anger and complaints. Migrants will invade rich countries and finally attack them. Man thinks he is like God, his pride is his folly. There will be saviours preaching truth but people will not listen to those words because people´s minds are full of fantasies and they always want more.

The prophet also talks about the children of our time who are suffering from the current lack of moral and spiritual teachings. People´s souls will be like dwarfs.

Full prophecy translated from French into English below.

I see and I know.

My eyes find in heaven what will be and I pass the time in one step.
A hand guides me towards what you can´t see or know.

Thousand years will have passed and Jerusalem will not be the Crusader town of Christ. The sand has buried the walls of our castles, our armor and our bones. It has stifled our voices and our prayers.

The Christian pilgrims from far right where they were and their faith, dare only approach the tomb and relics escorted by Jewish knight who here (…) have their kingdom and their Temple. (1)

The infidels will be an immense crowd that will spread everywhere
and their faith will resonate like a drum across the Earth. (2)

I see the immense earth.

Continents that Heroditus only saw in his dreams will be added beyond the great forests mentioned by Tacitus, and far away at the endless seas beginning after the Pillars of Hercules. (3)

Thousand years have passed since the time we live and fiefdoms will have gathered around in great kingdoms and vast empires.

Wars as numerous as the mesh of the coat worn by the Knights will have passed, defeating the kingdoms and empires, and creating others. (4)

Slaves, the peasants and the poor without fire, have rebelled a thousand times, burning crops, castles and cities, until they are skinned alive and that forced the survivors to return to their dens.

They are believed to be Kings. (5)

Thousand years have passed and the man has won the seabed and the heavens
and he will be like a star in the firmament.

He has acquired the power of the sun and will take it for God
Building on the immense earth a thousand towers of Babel. (6)

He has built walls on the ruins of those which had elevated the high emperors of Rome, and they will separate again from the legions and barbarian tribes.

Beyond the great forests will be an Empire.
When the walls collapse the Empire will no longer be a muddy water(Editor: China?). The people will once again mix. (7)

I see and I know how it will be.
I am the scribe.

When Thousand Years comes after the Thousand Years the man will be in front of the mouth of a shadow of a dark labyrinth.
And I see the end of that night in which he will sink into the red eyes of the Minotaur(Editor: Minotaur is a legendary beast).

(1) Vision of the State of Israel

(2) The ideology of Marxism spreads everywhere around the globe.

(3) Announcement of discovery of the Americas (located after the ”Pillars of Hercules”, the name given to the Strait of Gibraltar in ancient times)

(4) Fall of kingdoms and empires of Europe, the advent of American Empire and the European Union …

(5) Hidden rulers in the democratic era ?

(6) The all-powerful technology, travel space vehicles, control of nuclear energy, and expansion of cities (the ”towers of Babel”)

(7) Collapse of China and its great wall?

5
When Thousand Years will begin after the Thousand Years
Everyone will try to enjoy everything he can
The man divorces his wife, many times he will marry
And the woman will go through the paths lost (hollow) taking that which pleases Him
Children are born without giving the name of the Father

8
When Thousand Years will begin after the Thousand Years
The report of the death toll will be spread as a cloud on earth
The barbarians will be mingled with soldiers of the last legions
The infidels will live in the heart of the Holy Cities
Everyone will turn barbaric, infidel and savage

But then the man will be more than flesh weight
We barter her body like a piece of meat
We take his eye and his heart
Nothing will be sacred, neither his life nor his soul
We will play his body and blood as a carrion carving

They are like a seed that can not take root
Like straying and needy people, humiliated and desperate
The youngest and oldest men often without bonds
They will have trouble for saying hallo
And first of all they will fight themselves and they hate their lives

But it will be too late
The desert will eat the earth and rain will be more and more abundant
It will fall on certain days, taking everything as a flood
And she will not fall the next day
The air will gnaw on the weakest bodies

The man persist because his pride is his folly
He will not hear the repeated warning from the earth
But the fire will destroy the new Rome
And in the rubble accumulated
The poor and the barbarians will plunder the wealth despite the legion, wealth will be abandoned

25
When Thousand Years begin after the Thousand Years
The animals that Noah had on board his ark
Will no longer be in the hands of Man
Only beasts will be transformed according to his will
And who will care about their living suffering?

The man has made of each species what he wanted
And he will have destroyed countless
What will become of the man who has changed the laws of life
Which has made the living animal a lump of clay
Will he be the equal of God´s child or the Devil’s child?

29
When Thousand Years begin after the Thousand Years
Many men will be excluded from a human life
They won´t have rights, roof over their heads or bread
They are naked and only have their bodies to sell
They are placed far from the prosperous towers of Babel