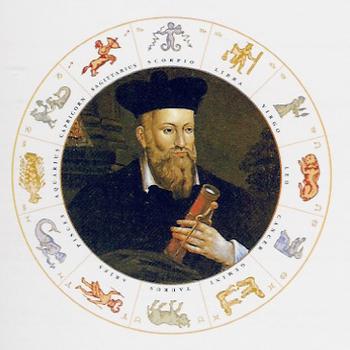 Nostradamus is one of the world´s most famous prophets from the 16th century. He came from the south of France and wrote down his prophecies in a scripture called the ”Quatrains”. These prophecies are not easy to decipher and we mainly focus on the parts related to the end of times here.

Nostradamus predicts in his ”Quatrains”:

”A new sect of Philosophers

Will not be bordering upon the German mountains:

To follow them they will have power and crowds.”

”At the foundation of the new sect,

The bones of the great Roman will be found, ”

”Libra will see the Hesperias govern,

Holding the monarchy of heaven and earth:

No one will see the forces of Asia perished,

Only seven hold the hierarchy in order.”

”Long awaited he will never return In Europe,

he will appear in Asia:

One of the league issued from the great Hermes,

And he will grow over all the Kings of the East. ”

”Chief of the world will the great ”Chiren” be,

Plus Ultra behind, loved, feared, dreaded:

His fame and praise will go beyond the heavens,

And with the sole title of Victor will he be quite satisfied.”

”Within the Islands of five rivers to one,

by the crescent of the great Chyren Selin.”

”To Ogmios will be left the realm Of the great ”Selin,”

who will in fact do more:

Throughout Italy will he extend his banner,
He will be ruled by a prudent deformed one.”

Our conclusion: We can see that there will be a great ruler born in the East and this man is referred to as ”Chiren”,”Selin” and ”Libra” by Nostradamus. He will found a new sect of people despising gold, honor and riches. As in many other prophecies, it is said that he will appear in Asia but he will also come to Europe and his name is connected to ”Li”, just like in many other prophecies. The word ”Chiren” in Chinese can be divided into two parts, ”chi” means ”energy” and ”ren” means ”tolerance, endurance, patience”. In Falun Dafa Qi Gong cultivation there is emphasis on ”Zhen-Shan-Ren” which can be translated into ”Truthfulness-Compassion-Tolerance”.  So in fact there is both ”chi” and ”ren” in Falun Dafa. Libra contains the name Li. It is said that He will govern in Hesperias which might refer to America. Master Li Hongzhi, the founder of Falun Dafa, resides in America. He founded Falun Dafa in China and then came to Europe and America and spread his teachings.

This ”Ren” which means tolerance, patience and endurance is said to be the hardest character trait to improve for any human being.