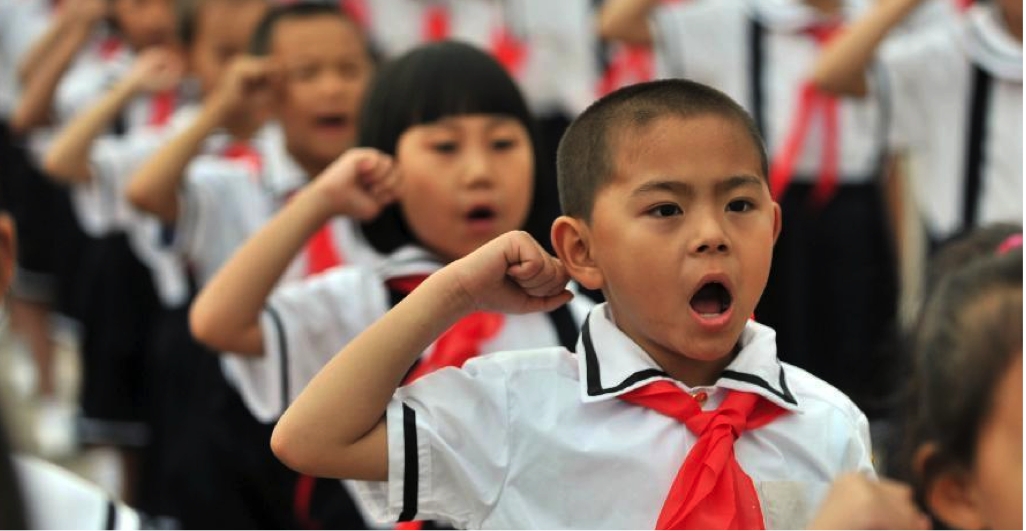 CCP(Chinese Communist Party) vows to Young Pioneers are made at age 6 in China.

Incredibly, the right-hand vow in China was foreseen in the Bible´s Book of Revelation 13:16 as the Mark of the Beast:

“It also forced all people, great and small, rich and poor, free and slave, to receive a mark on their right hands or on their foreheads.”

Many people have argued about the Mark of the Beast mentioned in the Bible. Some people thought that modern technology would create this mark for people while others had other opinions. In our humble opinion there is one outstanding phenomenon taking place in the biggest country of the world today, which is China. To be marked by the beast must involve taking an oath since without an oath how could you be punished for giving up your life to the beast?

Since the 1950s the Chinese Communist Party(CCP) has ensured that as many Chinese children as possible make a personal vow to love the CCP and communism to the bitter end. Since the CCP has the darkest history of any organization on earth, what does it mean to swear your allegiance to them? Isn´t this exactly what the Bible talks about in the Books of Revelation? We have previously mentioned that China is Jerusalem during the end of times in the Bible, hence it is natural that China also creates the Mark of The Beast. China has systematically arranged this mark in three categories from the age of six until adult age. Almost all Chinese has to swear the allegiance, excluded are people who are considerred the enemy of the CCP, ie people with ancestors who were land owners in China, dissidents or students who don´t follow the rules in school etc. It seems like these people will become lucky in the future as a fair repayment for their suffering today.

Translation of the young pioneers vow: “I love the Chinese Communist Party, I love the motherland, I love the people, I study well, I train well, I am ready to contribute to the cause of communism.”

If anyone refuses to make this vow or refuses to put on the red scarf at school, he will usually be expelled from school or at least he will be considered an outcast in school with no rights or benefits like other students.

Then there is a CCP Youth League which starts at the age of 14 and which involves around half of China´s students. It is considerred a benefit to join the Youth League in China and the oath is more serious than the Young Pioneers oath.

Translation of the Youth League vow below:

“I volunteer to join the Chinese Communist Youth League, and resolutely support the leadership of the Chinese Communist Party, I will comply with the league charter, implement the resolution of the league, fulfill obligations of a league member, strictly follow the league’s discipline, study hard, work actively, suffer first, enjoy later, and I will fight for the the communist cause.”

Finally there is the CCP membership from age 18 – the most serious vow:

“I volunteer to join the Communist Party of China, uphold the Party’s program and abide by the Party Constitution, fulfill duties of party members, implement the party’s decisions, strictly observe Party discipline, conserve the Party’s secrets, be loyal to the Party, actively work and fight for the Chinese Communist Party during my entire life, ready to sacrifice everything for the party and the people at any time, and never betray the Party.”

Many kids in China are looking for CCP membership as a way to enhance their benefits and career options. It is well known that members will have an easier material life than other people. What is less known is the spiritual suffering that follows these people with such a burden on their shoulders.

Any person who gives an oath to the CCP has sold their soul to the evil communist spectre, created by the likes of Karl Marx. Of course, we can´t blame the kids for being forced to take an oath but as adults they should realize and take away this evil vow. 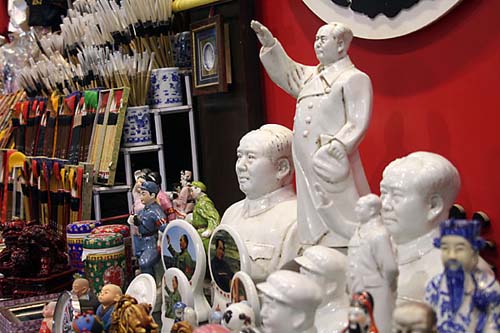 Mao Zedong worshipped as a God in China

As we know the CCP has established itself as an evil religion in China where modern people worship tyrants such as Mao Zedong and his portrait is placed in public places across the country.

China has always been referred to as “Middle Kingdom” or even “Center of the World” in ancient times. The Bible has talked a lot about Jerusalem, such as in Ezekiel 5:5:

“This is what the Sovereign LORD says: This is Jerusalem, which I have set in the center of the nations, with countries all around her.”

Jerusalem is China according to the Bible and if the Bible is correct, it has predicted the CCP vows being taken in China using the right hand.

We all know that according to Christian faith this kind of person will be eliminated at Judgment Day due to his “Mark of the Beast”. Around 15 million Chinese kids per year have given oaths to the CCP organizations since the 1950s. A rough estimate would place the number of Chinese who have given oath(s) to the CCP at around 800 million or more. This is the most terrifying oath that anyone with any faith in religion or goodness can imagine.

The prime enemy of the CCP – Falun Gong 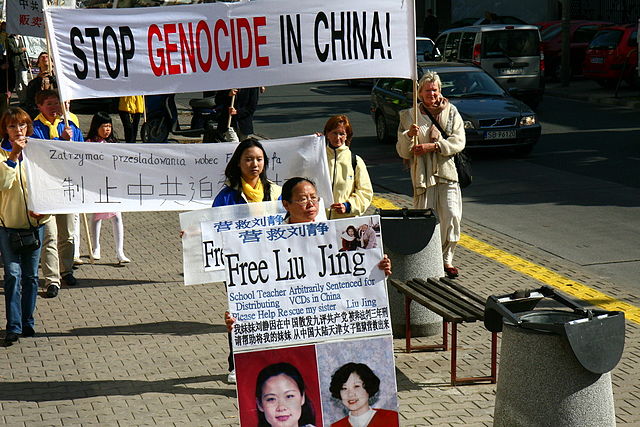 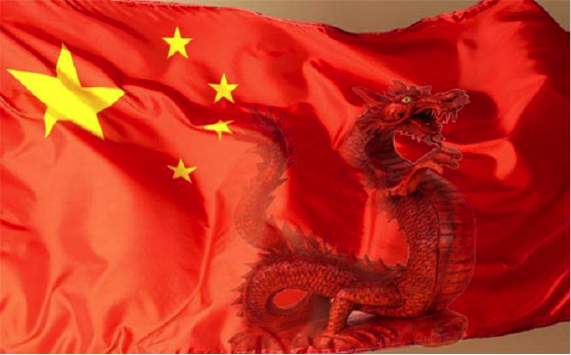 Revelation 12:9: And the great dragon was thrown down, the serpent of old who is called the devil and Satan, who deceives the whole world; he was thrown down to the earth, and his angels were thrown down with him.…

Revelation 12:11: And they have conquered him by the blood of the Lamb and by the word of their testimony, for they loved not their lives even unto death.

According to the Bible the “Great Red Dragon” will be conquerred by its main enemy. Since 1999 Falun Gong has been marked as the main public enemy by the CCP and this is in line with predictions from great prophets.

Many prophets have foretold that there will be a new spiritual faith on earth during the End of Times. Swedenborg wrote about this new spiritual faith in his book “New Church” describing how this faith will spread rapidly across the whole world by an enlightened man from China and how it will be attacked by evil people.

Falun Gong is a practice of body and soul which attracted 100 million Chinese in only seven years time and spread to more than 100 countries in a few years. At that point the CCP leader Jiang Zemin became jealous and illegally outlawed Falun Gong. At the same time the CCP started persecuting the practitioners in China and even harvested their organs for money. If the CCP is the beast of all the old prophecies, what is Falun Gong? Today the Falun Gong practitioners are the only people really standing up against the CCP on a global scale. Isn´t this a significant thing in line with ancient prophecies? Everyone should learn some facts about the CCP and Falun Gong to understand the world today and realize where there is evil and where there is goodness.

With these facts in mind we can also understand the reason why so many Chinese have joined the “Tuidang movement” initiated by Falun Gong practitioners(“the word of their testimony” in Rev 12:11) in order to help Chinese people get rid of their evil vows to the CCP. Up until today more than 220 million Chinese people have taken away their CCP vows. As time progresses and the evidence of the massive corruption and evil persecution of innocent people in China becomes obvious to ordinary people, the CCP will automatically collapse. We can only pray that as many people as possible have withdrawn from the CCP at that time.

This World is reaching its tail end and all the prophecies are coming true as we speak. The scriptures are there, the real world is here and we can match these two and find the truth. Communism is the antichrist and it is practiced openly in the east and covertly in the West as cultural marxism. The main battle field between good and evil is in China, the “Middle Kingdom” of the world.