To most people the conflict between Tibet and China seems very real but in fact it´s just the opposite and it has been proven by the latest CCP reports to the media.

Dalai Lama and the CCP(Chinese Communist Party) with Mao Zedong were the best of friends until 1959 when Dalai Lama fled to India. The obvious truth was that Dalai Lama along with the Panchen Lama in Beijing were the true superiors of Mao Zedong proven by Mao Zedong´s unknown but well documented statements about Dalai Lama and Tibet being “untouchable” by the Chinese Communists. After Dalai Lama´s flight to India Dalai Lama started to preach his gospel across the world with the excuse of being “persecuted” by Beijing. This fake conflict made it possible for him to get audience at all the top leaders across the world. 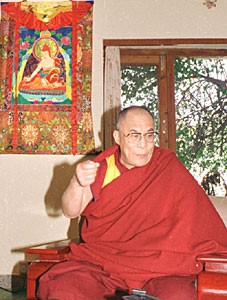 In the book “A Great Deception: The Ruling Lamas’ Policies” Dalai Lama says:

“It was only when I went to China in 1954-55 that I actually studied Marxist ideology and learned the history of the Chinese revolution. Once I understood Marxism, my attitude changed completely. I was so attracted to Marxism, I even expressed my wish to become a Communist Party member… I..went to China to meet chairman Mao. We had several good meetings.”

“I have heard chairman Mao talk on different matters and i received instructions from him. I have come to the firm conclusion that the brilliant prospects for the Chinese people as a whole are also the prospects for us Tibetan people; the Path of our entire country is our path and no other.”

He stated that he didn´t know of marxism until he went to Beijing in 1954. Those who have studied the Russian Bolshevik revolution know that the Tibetan lamas were extremely active in Russia with the Bolsheviks from the end of the 19th century. They built their first Kalachakra temple in St Petersburg already in 1908 and placed their lama there. How could Dalai Lama have been completely unaware of marxism in 1954 when he went to Beijing? The Lamas were behind marxism from the very beginning. Dalai Lama has also stated that he is an atheist – yet he wants to be called a “God-King”. In fact he tries to play the same trick as Lucifer did in the Bible.

In fact, Mao Zedong submitted himself to the Dalai Lama publicly when he stated in 1954 when Dalai lama arrived to Beijing:

“Dalai Lama is a living Buddha. He is a living God. He was not elected by the people… They believe in the Dalai Lama and its local chief much more than they believe in us. It is impossible to shake his position…” (“Radicalism, Revolution, and Reform in Modern China” By Catherine Lynch,Robert B. Marks,Paul G.)

It is said in textbooks that the Chinese army chased Dalai Lama when he fled from Tibet to India. The opposition states that he was terrified by fear of the Tibetan people who had realized him being a traitor to Tibet. Then take a look at the following report by “Radio Pekin” after his “flight” from Tibet:

Notice that after Dalai Lama enters India Radio Pekin still hails him as a “God-King”. They don´t mention anything about him escaping from the Chinese military. This means that Beijing was still under the yoke of the Lamas after his escape from the nationalists in Tibet. The whole Chinese history has been distorted by the CCP.

Yonghegong Lama Temple In Beijing – Untouched During The Cultural Revolution 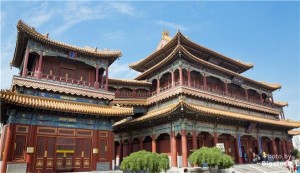 Some people claim that China has been ruled by Tibetan Lamas since the end of the 17th century when the Lama temple was constructed in Beijing at a very central place. It is said that the Lamas have terrified the rulers of China with their black magic skills that reportedly could kill a person at a distance of 300 yards unless he had let go of all fears for his life.

In fact, during the cultural revolution 99% of all Tibetan Temples were destroyed but there was one huge temple in Beijing that nobody dared touch – the Yonghegong temple where the Lamas  resided. Isn´t it a funny coincidence that while the CCP did everything to destroy Tibetan Temples in Tibet they didn´t do anything about the Tibetan Temple in their own back yard?… We see clearly again that Beijing was ruled by the black magic worshipping monks called Lamas. The kindhearted Tibetan people was butchered with up to 20% of all ethnic Tibetans being killed.

The 2nd of May 2017 we read the following news in the Hindustan Times: “The Communist Party of China has accused its own party officials in the Tibet Autonomous Region of donating funds to the India-based Dalai Lama, described by Beijing as a separatist conspiring to carve out an independent Tibetan state.

The unnamed officials were accused of donating funds to the Tibetan spiritual leader, joining underground pro-independence organisations and leaking secrets to overseas groups.

Their activity “severely undermines the Party’s fight against separatism”, a Communist Party magazine quoted an official as having written.”

Now we have the proof of what we suspected long ago, that Beijing funds Dalai Lama just like western organisations such as the CIA have done the same. What all this confirms is that there is only one side ruling the whole world – all conflicts between countries and faiths only serve the same Master – the Luciferians. They all seem to be ruled from Tibet by the Lamas.

Never mind that Beijing tries to blame some corrupt officials in Tibet, this is a way for them to escape the guilt in the future – but they won´t be able to escape any of it. Is it a coincidence that these facts come out at this moment? I don´t think so – expect huge political changes in the near future.