Anti-Machiavel: ´I will defend humanity against this monster´ 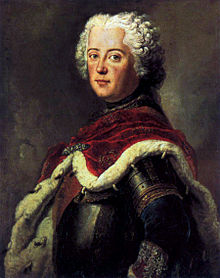 There are good books and there are books that you must read in order to be able to understand our world and its rulers. I claim that the book Anti-Marchiavel written by Frederick The Great in 1740 is such a book. For a more detailed description of Frederick the Great please visit this article.

According to Frederick was the book ”The Prince” written by Machiavelli in 1513 an extremely dangerous book which contaminated many Princes across Europe with bad ideas about how to rule a country. Therefore Frederick decided to defend humanity against such monsters as Machiavelli which plotted to destroy mankind by first destroying faith and then morality. He exposed every chapter of the book in his own book Anti-Machiavel. The main idea is that the type of Princes that are described by Machiavelli are no better than evil monsters that destroy our whole humanity. They have no morality and can go to any length in order to stay in power. Included in their menu of atrocities against others are assassination, poisoning, slander and all other kinds of depravities. Their most outstanding character flaw is that they are never satisfied and want more control and power over the people.

In the book we learn about Islam being the “blessed religion” which perfectly explains it meteoric rise and promotion by our modern rulers. Mass migration is a way to destroy the original people of the country and replace them with those more close to the rulers. We can therefore understand the deeper reasons behind muslim mass migration.

Feminism is elegantly exposed by Frederick as an ancient way to pacify strong men so that they don´t revolt against their tyrants. He also points out that an enslaved people become passive, fearful robots incapable of doing any good work so the ruler can´t ever have any benefit from enslaving them as they become the same like himself.

Moreover, Frederick discloses that all elected representatives are criminal puppets of the real rulers. In short, democracy is nothing but a show where the top ministers are traitors of their own countries, serving their bank masters and black priests.

Most importantly, when a tyrant is threatening the people with slavery or death the hope of the people is that an audacious person will step forward and overthrow the tyrant regime. This is exactly what the nations of Europe are waiting for at this moment. More and more people realize that our politicians are mere puppets controlled by hidden forces, usually banksters and high priests.

From the book Anti-Machiavel the step to understanding our current marxist paradigm is short. In fact, in the book the tyrants want to pull down all of humanity to disaster and bring them down to the same disastrous state of mind as they themselves are in. The most effective way is to invert good and evil and right and wrong. This is all done in order to imitate Lucifer and create their own kingdom of degenerates in hell. Compare with Marx words:

“My breast is equal to that of the Creator… My soul, once true to God, Is chosen for Hell… Nothing but revenge is left to me. I shall build my throne high overhead, cold, tremendous shall its summit be. For its bulwark – superstitious dread. For its marshal – blackest agony… While for us both the abyss yawns in darkness. You will sink down and I shall follow laughing, Whispering in your ears, “Descend, come with me, friend.””

Machiavelli describes the same group of people who came to dominate the whole world during the 20th century. They labelled themselves as “revolutionaries” at that time and in a sense it´s true. But what they revolt against is the whole of mankind which they want to pull down to hell. They stole the money production in the UK and later on in the US and used their money to pay off criminals and assassins in Paris and Berlin, which carried out all their executions during the so called revolutions. The idea was simple: kill all local competition in every country and take control over the money production. The rest is simple to achieve if you control the money.

Below some quotes from Anti-Machiavel:

“The main danger for a State is to let its subjects languish, and to let those who would otherwise be stout-hearted warriors become effeminized by faith-eroding luxury… The Romans, who had conquered Great Britain, and who could not hold it in peace because of the turbulent and quarrelsome mood of these people, tried to effeminize them, in order to moderate their belligerent and savage instincts, hoping to succeeds as in Rome itself.”

“The floods which devastate regions, the fire of the lightning which reduces cities to ashes, the poison of the plague which afflicts provinces, are not as disastrous in the world as the dangerous morals and unrestrained passions of the kings: the celestial plagues last only for a time, they devastate only some regions, and these losses, though painful, are repaired. But the crimes of the kings are suffered, for a much longer time, by the whole people.”

”The Roman Empire did suffer under emperors such as Nero, Caligula, or Tiberius, but the universe greets with joy the virtues of Titus, Trajan, and Antonin. There is a real injustice in concluding that the rotten apples are representative of all of them. One should preserve in the history only the names of the good princes, and let those of the others die forever, along with their indolence, their injustices and their crimes.  ”

”Duke Leopold was still so revered in Lorrains, that when his widow was obliged to leave Luneville, the people threw themselves to their knees ahead of her, and she had to stop the horses on several occasions. As her exile proceeded, only groans were heard, and only tears were seen. There was neither triumph nor joy in the eyes of the people victorious. “

“It is enough,” this malicious man tells us, “to extinguish the line of the defeated Prince.” Can one read this without quivering with horror and indignation?

”The third maxim of policy is, “to send colonies of loyal subjects from your old land into one or two places in the conquered territory, so that these may become, as it were, the keys of the Province”. This will be used to ensure fidelity of them…. “The Prince who establishes himself in a new Province whose laws and language differ from those of his own people, ought also to make himself the head and protector of his weaker neighbours, and try to weaken the stronger,” thus sowing dissention among them, in order to raise or lower those which he finds useful.”

The full text book can be read here.