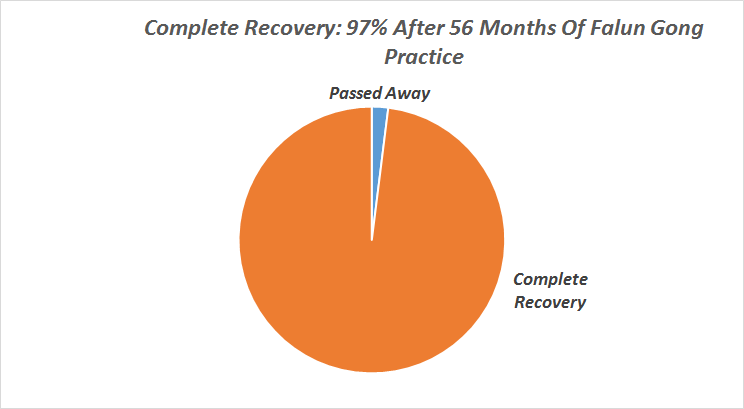 According to one of the authors, Dr. Yuhong Dong from Novartis, a global healthcare company in Basel, Switzerland, the study included a meta analysis of self-reported cases from Chinese cancer patients between 2000 and 2015 via a web platform. The eligible reports, which must be reviewed by two physicians, included only cases of terminal cancer with a Predicted Survival of less than 12 months and sufficient and verifiable medical information.(Source: Minghui.org)

The researchers were able to collect 152 eligible reports. The primary cancers included lung, liver, stomach, leukemia, esophagus, gynecological, pancreas/bile duct, and colorectal. The average onset age of cancer was 53. All patients started to practice Falun Gong after being diagnosed, or their treatment failed. The average Falun Gong practice duration up to the report date was approximately 53 months. The study focused on the Actual Survival up to the report date, symptom improvement, and quality of life. Out of 152 patients, 149 were still alive.

An astonishing 97% of all patients reported complete symptom recovery. Compared with the average predicted survival, 5.1 months, the actual survival, 56 months, was significantly longer. The average time to symptom recovery after practicing Falun Gong was only 3.6 months. Several indexes measuring quality of life after practicing Falun Gong showed significant improvement. Considering other therapeutic factors, the statistical analysis showed that the duration of Falun Gong practice was the dominating predictive factor for Actual Survival.

As we have seen in other scientfic reports on this website the health benefits from practicing Falun Gong has been outstanding. This is the first large scientific report in the west and it shows similar results as the reports from China during the 1990s before the practice was illegally banned by the Chinese Communist Party in July 1999.

Falun Gong is an old self cultivation method from China introduced by Master Li Hongzhi to the public in 1992. Quickly tens of millions of Chinese people came to practice and in 1999 it was said that there were 100 million practitioners in China.The practice is unique in terms of it being offered for free to the public. There is no membership or other fees and people can freely come to practice in a local park if they are interested.

For complete information about this scientific study: ASCO Research Report