The latest movie on the topic of the “End Of The World” is called Inferno and describes that the world is grossly overpopulated and something has to be done to reduce the number of people. In the movie Dante´s depiction of different layers of hell is turned into a prophecy because a scientist has created a special deadly virus that could kill half of the world´s population in a short time. In the movie this scientist is on the one hand depicted as evil but on the other hand he is depicted as doing good. The hidden message is that we should accept depopulation and that it´s necessary to kill many people for the greater good.

While the movie plot is average there are some interesting hints about other ideas among the elite. Everyone knows that Hollywood has a great influence on people´s minds so that is where we should look for the future plans.

In order to depopulate the world they claim in the movie that it´s not enough with birth control, sterilization etc. People need to die and they need to die as soon as possible. Secondly the movie tells us that the elite can “directly create a reality” for the masses, indicating the immense potential of a complete brainwash by the rulers of MSM(Main Stream Media). This is also in line with research in psychological experiments. Only a small minority of people will check alternative news sources and this gives the rulers freedom to create any opinion which suits their objectives.

There were two details in the movie that really stood out.

The first one was that the WHO had a hero´s role in the movie and that they used their own secret service to eliminate their enemies. The WHO is a global organization just like the UN. As we all know the elite wants globalism and a world state.  At the end of the movie the WHO took control over the deadly virus and then we were supposed to think that everything is safe. Big Brother means safety and he is our hero and a kind of God.

The second detail was that in Italy there was a scene where the WHO was chasing the “bad guys” and then they told the Italian police that “we take over now, this is beyond your jurisdiction”… So nations will have no jurisdiction in their own countries in the near future – this is another clear message.

The Georgia Guidestones were erected in 1979

Compare with today´s world where we have the Georgia Guidestones monument claiming that we need to depopulate the world down to 500 million and have a new world religion. And the message on the stones is written in all the major languages of the world. Does it sound familiar and in line with the movie Inferno? It does and the stones are standing on public property with nobody taking them down. There are seemingly powerful forces behind this monument. 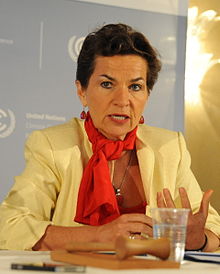 UN Climate Chief Figueres stated that: “We Should ‘Make Every Effort’ To Reduce Population Increases..”

It´s not sensational in any way to state that our rulers want to depopulate the world but the question is whether they believe that they have the right to do so. It seems more and more obvious that they believe they are in charge of matters and not “nature” or “Gods”. While it´s true that overpopulation is a problem we all know that nature takes care of these matters naturally among animals. Won´t nature do the same for human beings when the time has arrived? The crucial question here is what “nature” means. Is it the UN or is it a higher power? The eternal question is whether mankind rules itself or if it´s ruled by Gods. I believe it´s better that humans don´t play God.