In “Part 1 – Evolution Theory A Fraud” we investigated the apparent fraudulent behavior of Mr Charles Darwin when presenting his Theory of Evolution and how he and his family benefited economically after presenting his theory. We also discovered some other prominent hoaxes among evolution scientists as well as seeing the close cooperation between Marxists and Evolution Scientists in order to control the minds of people.

In “Part 2- (D)evolution Theory – Man Becomes More Stupid Over Time” we looked at some other question marks for the Evolution Theory including the creation of the extremely complicated first living cell, the degeneration of modern human beings in line with DNA mutation rates, the missing links of the fossil records, the laws of physics always creating more disorder which contradicts evolution into gradually more advanced life forms. We also mentioned something about prehistoric artifacts.

In Part 3 we will focus on the prehistoric civilizations that prove our text books to be extremely lacking in presenting the history of mankind and this earth.

What you will learn is shocking and it will make any open minded person wonder how he could ever believe in the Theory of Evolution. It seems like that theory is nothing more than a marxist fantasy conjured to mess up people´s minds and make them believe that they are monkeys while human beings are supposed to be the crown of this planet. 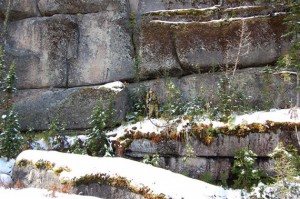 Siberian Megaliths Discovered Weigh Up To 4 000 Tons Each

The giant megaliths in Siberia were found and photographed for the first time by Georgy Sidorov who explored the area for the first time in 2013. Researchers state that from the scale depicted by the human figures, these megaliths are much larger (as much as 2 to 3 times larger) than the largest known megaliths in the world. Preliminary studies suggest that there are blocks of stone at Gornaya Shoria which weigh around three to four thousand tons.

The Megaliths of Baalbek are considered by mainstream scholars as some of the most impressive on planet Earth. However, there are numerous other sites. They are beyond fascinating and completely defy our understanding of ancient civilizations and their technical capabilities in the distant past.

Until today nobody can explain how human beings could possibly create this huge 40 metres high site of megaliths in distant Siberia in prehistoric times. Not only that, the megaliths are put together like a jigsaw puzzle as if they were cutting the megaliths as we cut our cheese. Baalbek is another unexplained megalith site with a history from about 12 000 – 20 000 years but its biggest stones only weigh up to 1 500 tons. In Siberia we are dealing with stones up to 4000 tons, truly impossible to deal with for any primitive human beings in prehistory. Even with our modern technology today nobody would dream about building this kind of megalith monument today since the costs would be astronomical and the technical challenges enormous.

Emperor Yu the Great 4200 Years Ago

Noah´s flood is a legendary story in the Bible but when did it really happen? Western history is short and has a culture less than 2000 years old. But Chinese history has a very well documented length of about 5000 years and it comprises a historic event of a huge flood engulfing the whole of China and even the world. Legend has it that this great flood engulfed China about 4200 years ago. Lasting for more than 20 years, it was finally tamed by the heroic efforts of Emperor Yu, whose Xia dynasty marked the birth of Chinese civilisation and its transition into the Bronze Age.

“This was the first stage in the founding of Chinese civilisation,” says Wu Qinglong of Nanjing Normal University. “But no scientific evidence had been discovered until now.”

This lack of evidence for such a flood had prompted some to challenge the truth of the story.

But we now have the first compelling evidence that the flood did actually happen at the time and place chronicled in the legend. In the Jishi Gorge, along the Yellow river, his team discovered rocks and sedimentary formations that could only have existed as a result of a cataclysmic flood.

Is this huge Chinese flood the same story that we read about in the Bible? It matches the historic dates quite well and it would also explain why western documented history is so short. 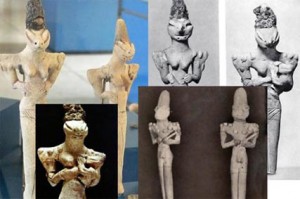 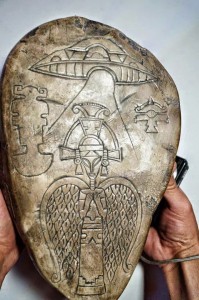 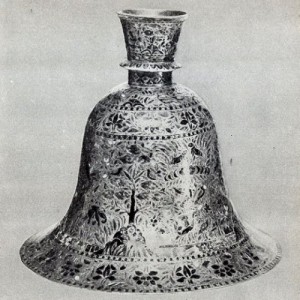 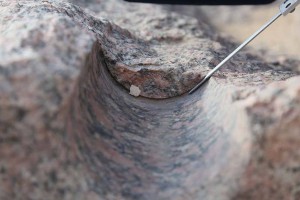 When we investigate the mysterious artifacts from around the world dating back thousands of years in time it is remarkable what the ancient people could achieve. How could they make small flying objects thousands of years ago in south America and why did they create alien lizards in Mesopotamia 7 000 years ago? How could they produce a metal vase of advanced composite materials millions of years? How could they drill remarkable precision holes in granite 4500 years ago? Did they have access to an advanced technology?

These questions are all up for the reader to put to himself. Is our human history perhaps much more complicated than our current text books suggest? If human beings have been reared into a global marxist conspiracy as we have proven earlier we suggest that it´s best that we think for ourselves without any notions from our state sponsored education. 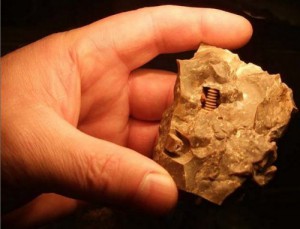 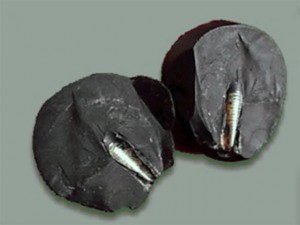 Top to Bottom: A 300 million year old screw embedded in a rock in Russia. A rod embedded in a Chinese piece of rock, allegedly millions of years old.

A Russian research team known as the Kosmopoisk Group claims to have found a one-inch screw embedded inside a rock that is 300 million years old. They say the screw is the remains of an ancient form of technology. However, reputed scientists say the ‘screw’ is nothing more than a fossilized sea creature called a Crinoid.

The Russian team investigated the remains of a meteorite in the Kaluga region of Russia in 1998, when they came across the strange object. A paleontological analysis was carried out, which revealed the stone was formed between 300 and 320 million years ago.  The team also claims that an x-ray of the stone shows that another screw is present inside it. However, they have not allowed international experts to examine the object.

Since the initial finding, much debate has surrounded the discovery, with scientists scoffing at the suggestion that it reflects an ancient screw and suggesting there is a much less exciting explanation. However the group claims that the screw is made of iron atoms while the rock is made of silicon. The problem for evolutionists is that we have many, many other instances of screws found in rocks around the world.

Found by rock collector Zhilin Wang in the Mazong Mountains of China, the hard black rock has embedded within it a metal rod of unknown origin and purpose. The rod has screw-like threads, suggested that it is a manufactured item, yet the fact that it was in the ground long enough for hard rock to form around it means that it must be millions of years old.

Submerged Cities On Ocean Floors From Millions Of Years Ago 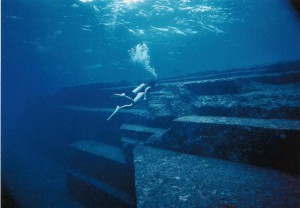 The Yonaguni Monument also known as “Yonaguni (Island) Submarine Ruins is a submerged city off the coast of Yonaguni, the southernmost of the Ryukyu Islands, in Japan. The origin of the site is hotly debated – many experts argue that is man-made, while conservative scientists insist it was carved by natural phenomena.

The unique and awe-inspiring site was discovered in 1995 by a diver who strayed too far off the Okinawa shore and was dumb-struck when he stumbled upon the sunken arrangement of monolithic blocks “as if terraced into the side of a mountain”.  The structure sparked instant controversy and attracted crowds of diving archaeologists, media and curious hobbyists, none of whom were able to ascertain its identity.

In 1996 more serious attempts were made to gather data and map out the structure. The process revealed many surprising findings including what appears to be a massive arch or gateway of huge stone blocks which appeared to fit together perfectly, right angled joins, carvings and what appeared to be stairways, paved streets and crossroads and grand staircases leading to plazas surrounded by pairs of towering features resembling pylons.

While many of the features seen at Yonaguni are also seen in natural sandstone formations throughout the world, the concentration of so many peculiar formations and 90 degree angles in such a small area seems peculiar.

If the structures at Yonaguni are indeed the remains of an ancient city, one possibility is the prehistoric inhabitants of Japan called the Jomon, who existed from about 12,000 BC to around 300 BC and who developed a sophisticated culture. 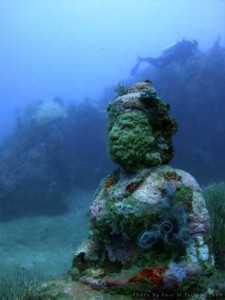 Outside India they have found a 9500 years old sunken city named Cambay Ruins (commonly known as Dwarka City in India) in the bay of Cambay.

Carbon-dating estimates the site to be a whopping 9,500 years old. The discovery astounded scientists because it predates all other finds in the area by 5,000 years, suggesting a much longer history of the civilization than was first assumed. More amazingly, the ruins contain architecture, pottery and human remains which are still intact. This forces historians to reevaluate their understanding of the history of civilization in the region.

This sunken city lies 120 feet below sea level and is 5 miles long and 3 miles wide. It was discovered by accident in 2002 by India’s National Institute of Ocean Technology as they where testing pollution levels. The discovery is more significant for Indians because Hindu Epics such as Mahabharatha which are often considered as myths have often mentioned this city. The ancient book says

“On the same day that Lord Krishna departed from the earth the powerful dark-bodied Kali Age descended. The oceans rose and submerged the whole of Dwaraka.“ 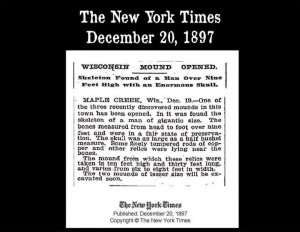 Another important suppression of artifacts in archaeology is the hot topic of human giants. Human giants were reported in virtually every culture around the world until the 17th century. Suddenly these stories disappeared but many archaeologists reported that they found giant skeletons around the world. Today no archaeologists want to discuss the topic and nobody has any clue who took away all the skeletons.

Only in America there were many reports of giant skeletons found across the US during the 19th-20th century. For a more comprehensive collection of giant stories in American media please visit: American Giants Reported In The Media

Interestingly legends report giants being up to 6 meters high and it´s in line with the american newspaper reports about their sizes too. Why have mainstream scientists hidden this fact for modern people? The obvious reason is that it would discredit the Evolution Theory where we are instructed to believe that the earth didn´t have any other intelligent beings for billions of years until suddenly ten thousand years ago a stone age man occurred with intelligence. Can we believe in their story considering all the prehistoric artifacts ?

There are countless other hot topics about prehistoric artifacts that we didn´t find space to report about here and we recommend the interested reader to visit the Epoch Times Beyond Science website or the Ancient Origins website to discover many more details and fascinating stories about prehistoric civilizations and their shocking implications for human history.

First of all we have shown you the global marxist conspiracy and its obvious links to the Evolution Theory. The conspirators used deceitful people mascerading as scientists working for them and fulfilling their fraudulent objectives to abuse the minds of modern people with false information. Secondly we showed the big scientific question marks surrounding the Evolution Theory in regards to how the first cell was created, how the current DNA mutation rate makes it impossible for a civilization to survive for more than 30 000 years, how physics makes all systems more and more chaotic and less ordered, how there are many missing fossil links between the species and nobody ever could create a new species in any experiment. In Part 3 we have shown that there are a large amount of unknown artifacts proving many prehistoric civilizations that existed before modern man´s history.

We encourage the reader to go and find his own truth about these matters. We only give you an introduction about ancient civilizations here.