We have previously discussed the old Tibetan society here as the role model of the NWO(New World Order). In our article ”Tibet – The Hidden History Of The 20th Century World Rulers?”  we showed the fascinating history of Tibet and its Lamas.

In that society 95% of all people had no legal rights whatsoever and the society was controlled by a theocracy with Dalai Lama as the absolute despot and some feudal landlords under him. The frightening stories about old Tibet have been many and both the Bolsheviks and the Nazis were allied with the Tibetan lamas in order to obtain occult powers. 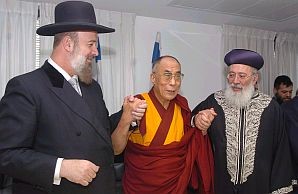 It is prophecied that the Dalai Lama will become the Antichrist

The Nazis travelled to Tibet on expedition and said:

”They(the lamas and aristocracy) are above all the rulers on this earth in that they are real kings, absolute leaders… Their way of life is proud and manly..” (SS officer Ernst Schäfer)

Why is this story about Tibet interesting? Ín our article ”Dalai Lama – The Antichrist Of Buddhist And Christian Prophecies” we pointed out Marxist Dalai Lama as the prophecied Antichrist that will come to rule the whole world in the future. Before that the first resurrection will take place however and people will learn many truths about human life, the existence of Gods and the shocking truth about Falun Dafa and the evil persecution going on in China as we speak.

After the prophecied 3 1/2 years when the Lord is allowed to rule the world the Antichrist will take over again and he will try to destroy everything which is good and upright. At that time people will have a choice to either fight the Antichrist or become enslaved. This is what many, many prophecies predict.

”This Prince of Liars will swear by the Bible and pose as the arm of the Almighty, chastising a corrupt age.

In the beginning he will work by cunning and crime. His spies will infest the whole world and he will become master of the secrets of the mighty. He will pay theologians to show that his mission is from God.

A war will give him the opportunity to assume his true role – this war will not be the one he will wage against a French sovereign but one which will within a fortnight involve the whole world and will be easily recognised by his mark on his followers.”

”The Angels will enlighten men and in the third week they will wonder if this is truly the Antichrist, and realising that it is they will either have to fight to overthrow him or become his slaves.

Antichrist will be recognised by various tokens: in especial he will massacre the priests, the monks, the women, the children, and the aged. He will show no mercy, but will pass torch in hand, like the barbarians, yet invoking Christ! His words of imposture will resemble those of Christians, but his actions will be those of Nero and of the Roman persecutors. He will have an eagle in his coat of arms as also his lieutenant, the other wicked ruler – this latter will be a Christian who will die when cursed by the Pope, who will be elected at the beginning of the reign of Antichrist.

Priests and monks will no longer be seen hearing confessions and absolving the combatants: partly because they will be fighting alongside other Christians and partly because the Pope, having cursed Antichrist, will proclaim that all who fight against him, if they die, will go to Heaven as martyrs. The Bull, proclaiming these things will rekindle the courage of the faint-hearted and will cause the death of the monarch allied with Antichrist. Before Antichrist is overthrown however, more men will have been killed than were ever within the walls of Rome.

”Never will humanity have been faced with such a peril, because the triumph of Antichrist would be that of the demon, who will have taken possession of man´s personality. For it has been said that, twenty centuries after the Incarnation of the Word the Beast will be incarnate in his turn and will menace the earth with as many evils as the Incarnation has brought it graces.

Towards the year 2000 Antichrist will be made manifest. His army, will surpass in number anything that can be imagined. There will be Christians among his cohorts, and there will be Mohammedan and heathen soldiers among the defenders of the Lamb.”

This prophecy shows that the Lord has a plan for good people so that they can save themselves from destruction by helping the Lord to implement a divine culture on earth. All bad things can have a positive effect and in Norse mythology it is said that if someone dies honorably in battle he will go to heaven. We know from previous articles that the whole world is ruled by marxism and the future prophecied battle will be between the marxist people and the people who want to return to a divine culture – in brief it will be between atheists and believers. All of this will take place very soon according to prophecy. 2017 will be the start of this whole process according to some of the greatest prophets ever such as Buddha, Ragno Nero, Rabbi Ben Judah, Therese Neumann etc.