Since the origin of times the issue of how to conquer an enemy has been central to many militaries but also to leaders hungry for power and riches. The dream of many corrupt people has been to obtain global power under one iron fist. If we take a look at a document from 1946 which was signed by the State Attorney in Florida we see the global communist conspiracy against the western societies very clearly. Not only that, we see that they have achieved their goals in making this society a society with immense focus on sex, sports, interpersonal conflicts and corruption in our governments. 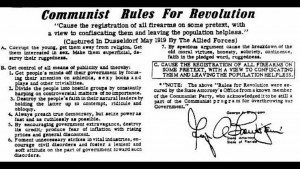 This Document Signed By The State Attorney In Florida In 1946

The most sinister part of this document is that young people is the primary target of the communists. We have earlier mentioned that feminism targets children by taking their mothers away from them and making their future gloomy. The evil but effective strategy means turning young people into beasts by making them forget everything about religion, family, virtues etc and make them indulge in all kinds of depravity. Make people focus on sex, sports and other trivialities. Make people lose all confidence in their government by corrupting the government from the inside. Create conflicts by dividing people into hostile groups. Preach democracy but seize power as fast and ruthlessly as possible. Make people dishonest and rugged by destroying the traditional virtues.

Finally make people physically defenceless by taking their firearms away from them.

The Essence Of ” Communist Rules For Revolutionaries” In Warfare Terms

Communism is nothing less than an alien satanic force that tries to undermine human society by destroying all our human culture which kept society stable for thousands of years. They want to destroy all family life, harmony, social relations, health, loyalty, patriotism, honesty, sobriety etc to finally take power openly as evil tyrants.

Midgard Snake Coiling Around The World

Communism is a global phenomenon and it´s truly the “Midgard Snake” coiling around the whole world today using different names and covers in different countries. This group of people have spread over the whole globe and infested each and every country where they try to destroy harmony, morality while seizing power in the corrupted democracies. They have all kinds of names: lamas, jews, christians, muslims, globalists, liberals, conservatives, socialists etc but they can all be identified in terms of which kind of society they support – a society without traditions, morality and religion.

These people can change appearances and opinions in a split second if it benefits their quest for power and riches. They have no principles and no dignity. They must be stopped by the local people of each nation. This is also prophecied by Ragno Nero to take place starting from this year and going forward a few years.