As mentioned in many earlier articles the Corona outbreak in China and the world has been prophesied by many prophets such as Ge An in South Korea and in modern times by Mr Li Hongzhi, the founder of Falun Gong. Today we don´t know whether the virus was created and spread by the CCP or not but let´s not focus on that part here. Instead we try to analyse the statement “History is repeated” and look at the deeper reasons for the spread of corona to the world.

In fact, we have reported that Falun Gong is the prophesied way to save people at the end of times when mankind´s moral standard has collapsed and a culture of corruption, anti-family, violence and all kinds of vices are spread as the good lifestyle by the media and governments. The “red dargon” is the prophesied mortal enemy of Falun Gong in all prophesies and the red dragon is a reference to the CCP(red flag of China symbolises the blood of the red dragon´s 80 million Chinese victims).

If the prophets are right we have two opposing spiritual forces in the world: Falun Gong and the CCP. One righteous way and one heretic way.

Wuhan and Falun Gong – the Background 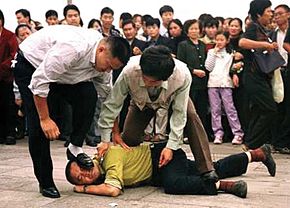 So if there really are hidden hands from Gods manipulating the human world we see a definite pattern here. China and Wuhan was the first place to initiate the loathsome persecution of Falun Gong more than 20 years ago. Now the Gods reverse every evil action done by the CCP against Falun Gong, meaning that Wuhan is first struck by a plague and then it will spread to other cities and finally to the whole world.

Which Countries will be Struck Hard by the Corona Virus?

Next question is to see which countries that supported China in their decision to persecute Falun Gong? Well, we all know that Iran is very close to China and the whole EU of course. Sweden is like a province of China and the root of western cultural marxism that supports the Chinese takeover of the west. In Sweden the main stream media has attacked Falun Gong relentlessly for many, many years.

Now we see many new Corona cases in northern Italy and everyone who visited Milan knows that there is a huge Chinatown there and the Italian government has been in bed with the CCP for many, many years. The story that you don´t hear of is that many of the Italian corona cases are from Chinese people in Italy.

All in all, expect the spread of corona in EU and China and in many other Asian countries with deep CCP connections. The US is basically the only country that stands up to China so expect them to do very well with the corona virus.

How Serious is Corona?

In fact, the virus basically doesn´t hit kids or young people. From a supernormal perspective it seems like the young ones have their guardian angels and therefore they escape this disease. For older people it´s not as easy. Men are most easily struck down by the virus and men with underlying illness are at risk of dying. Strangely the disease also kills many men in the 30s and 40s. The mortality rate is hard to estimate and it is too early to tell because some people die after a month or more in intensive care. In China it seems like the mortality rate is between 2-20% but more probably around 10-15% longterm.
What is the next step? According to the Bible we will soon expect a new disaster because the world governments won´t repent from its sins(sleeping with and worshipping the world demon CCP) and therefore there are many different disasters striking mankind in a series of events.