The Antichrist Of The Human World 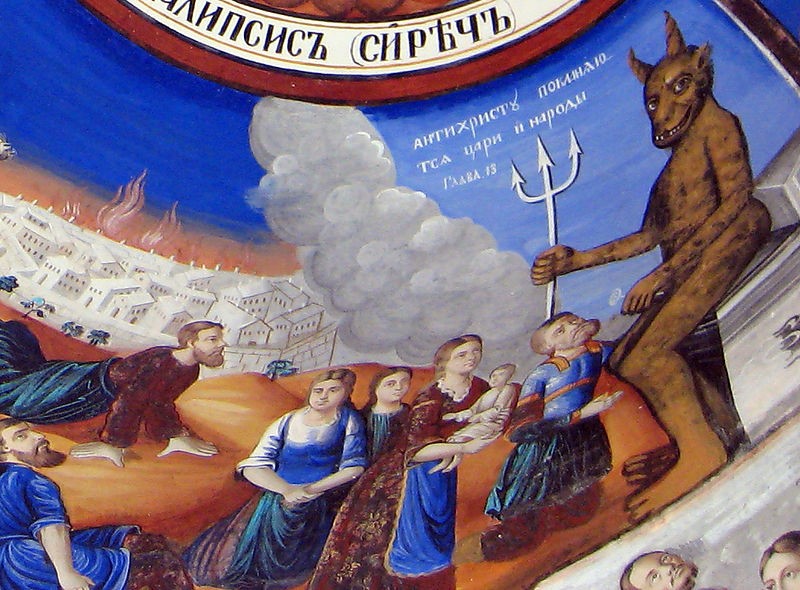 Painting of Antrichrist by A. Lefterov. Text: All Kings and Nations bow before the Antichrist

Since thousands of years it has been prophecied that Satan or the Antichrist will arrive at the End Of Times to deceive all the Nations of the world. From the prophecies we have read that he will be an intelligent and wellspoken man ready to deceive as many people as possible. He will come to power at the End Of Times when the whole world will shout ”Peace” and when everyone accepts a One-World ruler.

Here we look at some ancient prophecies about the Antichrist and compare with today´s world leaders.

Christian Prophecies About The Antichrist 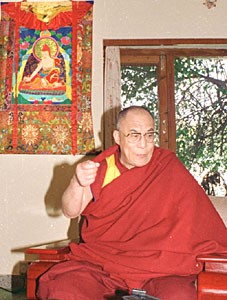 ”This impious man … will give orders that he himself shall be worshipped as God. ”(Lactantius, AD 300)

There is only one person in the world being called a ”God-King” by the Main Stream Media. We make an example here from the UK press below: 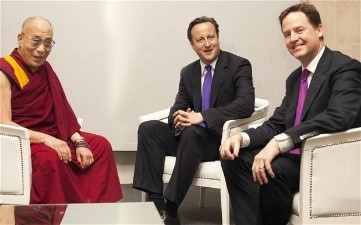 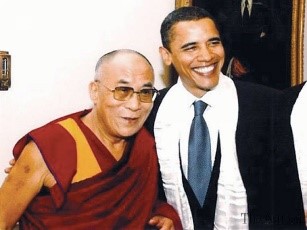 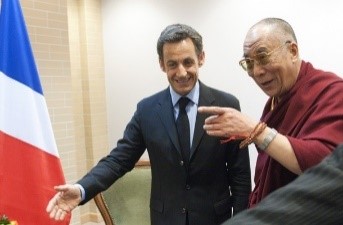 ”Christ is king of things celestial and terrestrial, and Antichrist will be king upon earth.” (Hippolytus, circa AD 200)

There is only one person who has free access to at all Heads of State across the world since several decades.

Politicians change but Dalai Lama continues to visit new Heads Of State. Is this a coincidence? 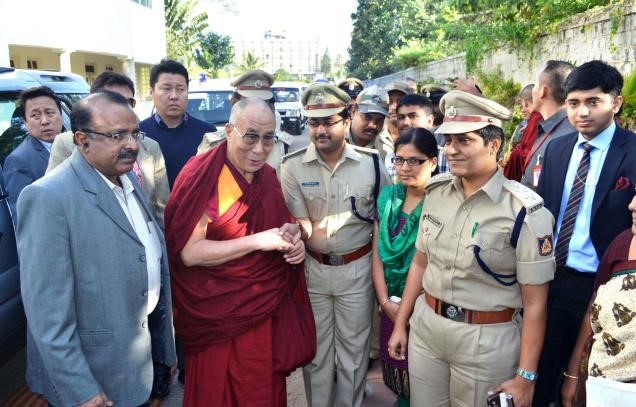 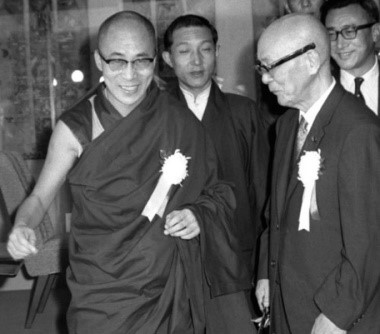 ”Antichrist will come as the Messiah from a land between two seas(India – Editor´s remark) in the East… He will begin work in the East, as a soldier and preacher of religion when thirty years old… He will take the riches of the world to Jerusalem and appear to have power over natural laws. (B.Holzhauser, 1650)

”Antichrist will be possessed by Satan and be the illegitimate son of a Jewish woman from the East.” (St. John Chrysostom, AD 400)

”Antichrist will come from a land that lies between two seas, and will practise his tyranny in the East.” (St Hildegard, AD 1150)

”He [Antichrist] will be exceedingly learned in all satanic wiles and will show great signs. The entire world will hear and see him. He will ‘stamp’ his people with satan’s seal; he will hate Orthodox Russia,”(Venerable Fr. Lavrentii, AD 1900)

We know that Dalai Lama lives in India and we know that he started preaching abroad when he was 31 years old. Since then he has been preaching around the world for around 50 years.

Good And Evil Is Always Balanced In Prophecy

”One person told me that the end of the world will have two Easterners. Right and wrong. Priesthood will celebrate the wrong – and war begins.” (Eudokia Chudinovskaya prophecy from Chelyabinsk region (1870-1948)) 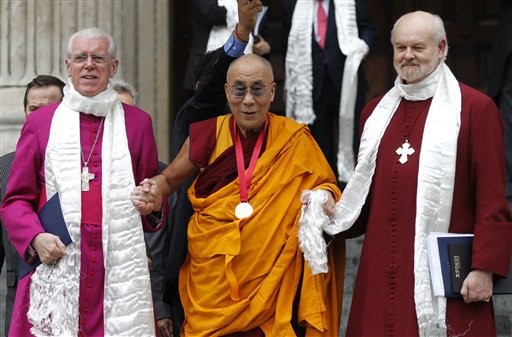 Dalai Lama with the Bishop of London.

Dalai Lama is not only immensely popular among the leading western politicians but also among other religions, ie Christian priests. This is a perfect match according to prophecy. Why did a priest from a remote area in China with a very small population become so powerful and popular across the whole world, even with other religions? And there are very few practitioners of his religion in the west too. Will Christian priests, Jewish Rabbis and Buddhist abbots form a world religion under Dalai Lama?

Dalai Lama has an absolute belief in the Kalachakra prophecy which was presented by Buddha Shakyamuni around 2500 years ago. Since 1951 Dalai Lama has held Kalachakra initiations for around two million people around the world and charging westerners a lot of money to be able to participate in his ceremonies. 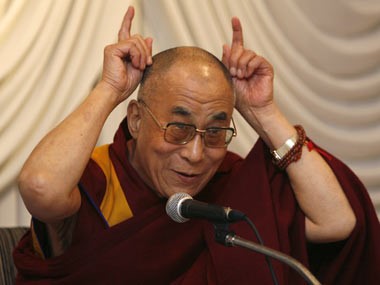 Dalai jokes about himself being a devil

”From henceforth I am your [deity] Vajrapani. You must do what I tell you to do. You should not deride me, and if you do, not forsaking fright, the time of death will come, and you will fall into hell” (Dalai Lama XIV, 1985, p. 242).

The main points of the Kalachakra prophecy are:

This is the final battle between good and evil, the battle beteen the true Buddhists and the Barbarians. Good will overcome evil. The King of Kings is called Raudra Chakrin and he comes from his perfect Kingdom called Shambhala(”Land of Bliss”). Raudra Chakrin will appear during the epoch of ”Non-Dharma” when the people…have become egotistic and materialistic.

In the Kalachakra prophecy, ”Krinmati”, the ”King of Delhi”, will declare himself Mahdi – the ”supreme enlightened being”. ”Krinmati” in Sanskrit also means ”The Destruction-minded One.” This is the ”Demon King” of the World.

Dalai Lama refers to himself as ”God-King” and ”His Holiness.” Just like the Demon King does in the prophecy when he appoints himself the ”supreme being”.

Dalai Lama is of non-Indian descent and he lives in India. A perfect match for the Demon King ”Krinmati”.

Dalai Lama Is A Marxist And An Atheist

Dalai Lama says that he is a Marxist, which means that he belongs to an atheist belief system. He has also directly said that he doesn´t believe in God or a creator:

”Frankly speaking”—he stole a glance at the archbishop and declared firmly—“when you and our brothers and sisters talk about God, creator, I’m nonbeliever.” (God Is Not A Christian: Desmond Tutu And The Dalai Lama’s Extraordinary Talk On God And Religion)

These statements fit the Antichrist perfectly. 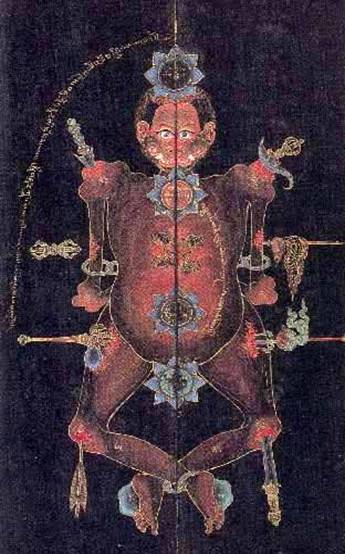 Tibetan lamaism has a great focus on black magic. Dalai Lama boasted about his occult powers when Mao Zedong died in 1976. During a Kalachakra ritual he staged a rite connected to the Kalachakra Tantra.

”On the second of the ceremony’s three days, Mao died. And the third day, it rained all morning. But, in the afternoon, there appeared one of the most beautiful rainbows I have ever seen. I was certain that it must be a good omen” (Source: Dalai Lama XIV, 1990, 222)

”Antichrist will present himself to the Jews as the Messiah. They will be his followers.” (Bible: 2 Thess. 2:9)

”Antichrist shall enter in triumph the city of Jerusalem and will sit on a throne in the Temple to be adored as if he were the Son of God. ” (St. Zenobius)

”Antichrist would first seize the empires of the East; he would have Jerusalem as his seat and imperial Capital. (Sulpicius Severus)

”Antichrist will rule the world from Jerusalem, which he will make into a magnificent city.” (St. Anselm)

”Jerusalem, 20 February 2006 (By Matthew Wagner, The Jerusalem Post) – Chief Rabbi Yonah Metzger called on Sunday for the establishment of ‘a religious United Nations’ representing the religious leaders of all the countries in the world. Metzger suggested establishing the religious UN in Jerusalem and placing the Dalai Lama at its head.

Metzger raised the idea during a meeting that includedd himself and the Sephardic Chief Rabbi, Muslim leaders, and His Holiness the Dalai Lama, Nobel Prize-winning peace activist and leader of the exiled Tibetan people.”

As we can see the plan to put Dalai Lama as the Head Of A  World Religion in Jerusalem is already in full swing. Pope Francis has already earlier given his support to the United Religions and now we only wait for the green light from the Vatican.

Comparison Of Antichrist In Prophecies And Dalai Lama – Summary

While we can not prove that Dalai Lama is the Antichrist we notice that Dalai has many similarities with the Antichrist of the Christian prophecies and the Demon King of the Buddhist Prophecy. He seems to make every nation except China and perhaps Russia bow down to him. He is even accepted by the top jewish rabbis as their religious leader to be placed in Jerusalem – which is exactly in line with prophecies. What is the real history of Tibet, this mysterious country?

We will try to show you these facts in part 2 of this article.